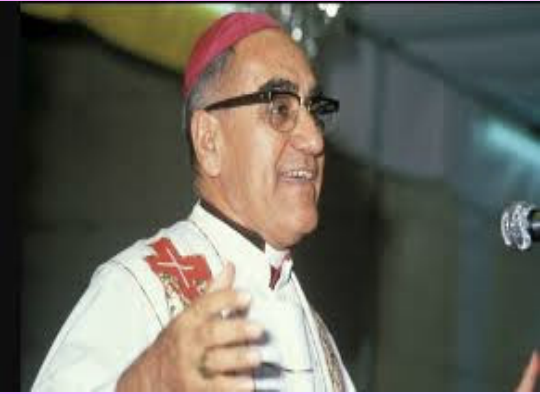 The Life of St. Oscar Romero

Patron Saint of All Souls Catholic Parish and School

Oscar Arnulfo Romero was born into a family of ten on 15 August, 1917 in Ciudad Barrios, El Salvador. His father was in charge of the local telegraph office. Sometimes the young Romero helped his father to deliver telegrams. Oscar learned to be a carpenter, making tables, chairs and doors. When he was 14 years old, Oscar wanted to be a priest so he went to study at junior seminary.

When his mother was ill and they needed money for medicine, Oscar left the seminary for three months and worked in the gold mine in Potosí. He earned about 4p a day. In 1937, Oscar went to Rome to study and stayed there during World War II. His father and brother died while he was in Rome. In 1942, Romero was ordained a priest and returned to El Salvador. He became famous for his sermons. He also did a lot of parish work like visiting prisons, organizing catechism classes and working with others in the Church to provide help and food for the poor. In 1970,

Romero was made a bishop and met Pope Paul VI in 1978 while he was Archbishop of San Salvador. Violence increased in El Salvador by the mid 1970s, as the government and army began killing poor people who stood up for their rights. When the army killed three people in the village of Tres Calles in Romero’s diocese, he comforted the families and wrote to the President to protest about the murders.

Romero became Archbishop of San Salvador, the capital of El Salvador. Some rich people were happy because they thought he would stop priests from helping the poor to stand up for their basic rights. But a few weeks later, his friend Fr Rutilio Grande was shot and killed, along with two companions. The following Sunday, Romero allowed only one Mass in the whole diocese – at the Cathedral – where he spoke out against the murders. As the violence in El Salvador continued, Romero continued to speak out. Every Sunday his sermon was broadcast by radio.

The whole country listened. Romero’s life was often threatened. In his sermon on 23 March, Romero ordered the army to stop killing people: “In the name of God, and in the name of this suffering people whose cries rise to heaven more loudly each day, I beg you, I implore you, I order you, in the name of God, stop the repression!” The next day, a shot killed Romero as he celebrated Holy Mass.

A UN report later found that Major Roberto D’Aubuisson, had ordered Romero’s death. Thousands came to the funeral. The army fired into the crowd. 30 people died and hundreds were injured. The civil war in El Salvador continued until 1992. On March 27th our parish of All Souls will bless the shrine of St. Oscar Romero in our church and accept him as the secondary patron saint of our parish and school.